The Shrine of Saint Therese of Lisieux

Our Lady of Mount Carmel Church was founded in 1905 in Little Italy, Nesquehoning, PA.  In 1918, the Most Reverend Dennis J. Dougherty, Archbishop of Philadelphia, acquired four lots from the Lehigh Coal and Navigation Company along Garibaldi Avenue for $1.00 “for church purposes only.”  This became the site of Our Lady of Mount Carmel Church in New Columbus.    The church was relocated from Little Italy and rebuilt at the corner of Garibaldi and Venice Avenues. The latter was renamed Angelini Avenue (1988) in honor of Monsignor Angnello J. Angelini.

Monsignor Angelini and the Our Lady of Mount Carmel Church 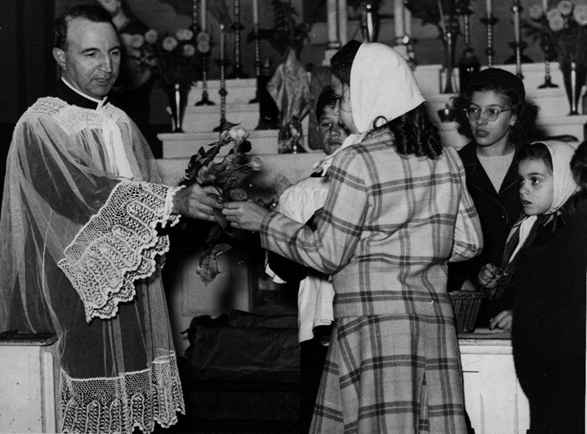 Father Angnello J. Angelini was born in Caivano, Italy, in the Diocese of Aversa on October 18th, 1899, and came to America at the age of 5 years with his mother Teresa and his sisters.   He arrived in Roseto, PA, on Sunday, November 6, 1904.

Father Angelini received his formal education in the Roseto and Bangor, PA schools, graduating from the Bangor High School on May 31st, 1918.  He entered the Seminary of St. Charles Borromeo, Overbrook, Philadelphia in September, 1918, and was ordained in the Cathedral of Saints Peter and Paul in Philadelphia, PA, by the Most Reverend Bishop Thomas J. Shahan on June 6, 1925.

On September 12, 1932, Father Angelini became the pastor of Our Lady of Mount Carmel Church in New Columbus.  In 1950, the new Italian Church was built along Garibaldi Avenue under Father Angelini’s ministry.    He also oversaw rebuilding of the rectory in 1967.

The parish rejoiced with the appointment by Pope Paul VI on May 11, 1964, when Father Angelini was elevated to the rank of Domestic Prelate, and now had the title conferred on him of Rev. Monsignor Agnello J. Angelini.  The parishioners were very proud of the many accomplishments their pastor successfully completed for the church and the Diocese.  Monsignor Angelini had the honor of celebrating a Mass with Pope John Paul II as the Allentown Diocese's representative when the pontiff was in Philadelphia in 1979.  He was a man of great vitality, intellect, rhetorical ability and he possessed a dynamic personality.  He was in constant demand as a speaker throughout the Panther Valley and surrounding counties for all occasions and by all organizations.  His humanitarian efforts earned him many awards including the prestigious State of Pennsylvania American Legion Award.

The love and respect that Monsignor Angelini had for military service personal was demonstrated throughout his lifetime of service to the community of Nesquehoning.  He was honored at his funeral in 1987 with a military honor guard.

Many military service men and women departing for World War II, Korea, and Vietnam have fond memories of a dedicated, loving priest at the train station in Jim Thorpe blessing them and praying for their safe return.  Monsignor Angelini saw brave men and women leaving to serve their country rather than Catholics, Protestants or any other religious denominations.  He gave each one his blessings and a religious medal and scapular to carry with them overseas.  To this day many of these medals are still carried by veterans or their surviving family members.

When the bell tolled on May 16, 1987, announcing Monsignor Angelini’s death, the Panther Valley was hushed in silence and respect for the dynamic, forceful, congenial, simpatico priest whose numerous trips to area hospitals and the prison in Jim Thorpe may have ceased but will never be forgotten by those patients and inmates that he visited.  His memory lingers on, and is still a strong influence on those who followed him.

Annual religious holidays were important to Italian American communities.  Feast day celebrations that honored individual saints, often the patron saints of their native towns or villages, were also important.  These celebrations were symbolic, not just of their Italian heritage but honoring particular saints also reflected their connections to specific regions and localities in Italy.  In the additional history below, details are provided about the impact of New Columbus’s Catholic Church, and its beloved priest Monsignor Angelini.   He organized many festivals and celebrations that were attend by members of his parish and also non-Italians. Many of these types of events are similar to those documented in histories of Italian-American communities such as Philadelphia, Reading, and Roseto in Pennsylvania, New York City, and other towns and cities. Folklorists have documented the importance of these public celebrations, observances, and events—whether based in religion or not—in continuing the communities’ connections to their ethnic heritage and helping to establish new identities in the United States.  Many of these special events continued well into the twentieth century.  Some still go on today.  In New Columbus, after 1941 the processions, parades, holiday observances, and other community events almost always involved a gathering and ceremony in front of the Grotto.

The St. Theresa Celebration was a regional Italian festival.  Monsignor Angelini’s dedication and devotion to St. Theresa of Lisieux, France, The Little Flower of Jesus was the inspiration for the St. Theresa Shower of Roses celebration.  This celebration started in 1932 and remained highly attended during its 75 years.  Pilgrims from the tri-state area and beyond came by car and bus to join in the celebration.  The Grotto was not only a focal point but the destination for all pilgrims during the feast day of St. Theresa. 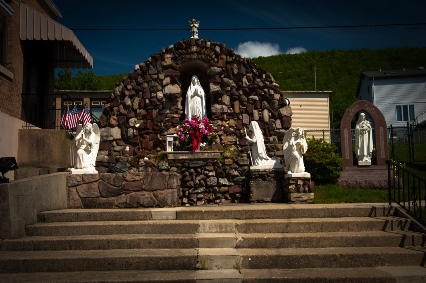 The day began with several masses in the church and during the third mass there was a procession which included the Rose Queen, a selected teenage parish member and her court.  At this mass, the Rose Queen was crowned.  At 1:30 pm a mass was held at the Grotto, with the Rose Queen accompanied by her court.  After this mass, the Queen was escorted to the St. Theresa’s float. The float was adorned with blessed roses and a life-like statue of St. Theresa.  At 2:30 pm, crowds of people congregated in front of the church to participate in the procession.  The rosary was recited during the procession throughout the streets of New Columbus.

Throughout the day, people gathered at the grounds of the Grotto and they brought with them containers to fill the water that flowed from the rocks of the Grotto.  The water was blessed by the many priests who were present at the Grotto.  People also gathered at Madonna Hall (located behind the church) to join in the festivities of music, a spaghetti dinner and other delicious ethnic foods.  Each year more than one thousand St. Theresa candles were lit in the church  and at the Grotto at the request of the pilgrims for their special intentions.  Vendors from within the tri state area also came with their wagons of goods.

At the conclusion of the procession, the Rose Queen would dress in the likeness of St. Theresa. Prior to 1975, the Rose Queen would be taken to the local airport in Lehighton, PA, where she boarded a helicopter filled with hundreds of long stem roses.  The helicopter, escorted by several single engine airplanes, flew over New Columbus and showered roses over the area.  The helicopter then landed in the John Cerchiaro Memorial Park (across from the church).  The Queen then departed the helicopter and walked through the crowds to the Grotto.  This was the highlight of the celebration.  Monsignor Angelini used his influence to have a fly over of Naval jet planes from Willow Grove, PA, during one of 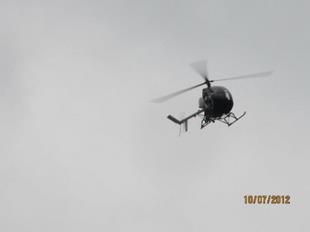 the celebrations.  After the procession, Benediction was held at the Grotto.  Due to insurance liabilities, the Rose Queen no longer flew in a helicopter after 1975, and the co-pilot tossed the long stem roses.    Thousands of people would run to catch a rose falling from the sky.  People would even climb on the rooftops of homes to acquire a blessed rose.

The day ended with Monsignor boarding every bus to bid farewell to the pilgrims with a long stem rose for each person.  At the height of the St. Theresa celebration there were more than 60 buses that found their way to New Columbus (a population of 800+).  The event was carried by the local news stations and as far away as Philadelphia, PA and Florida.  Many articles were written by newspaper reporters who attended the event from all over the area.  A statue of St. Theresa sits to the right of the Grotto in memory of Monsignor. The street adjacent to the church was renamed Angelini Avenue in 1988.